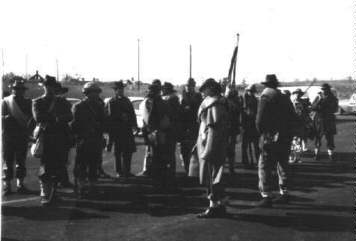 During the Civil War Centennial celebration, many units were formed hurriedly to meet reenactment needs. One of the best of these units was the 2nd North Carolina commanded by Colonel George Gorman. In the spring of 1967, Lawrence Bopp was enlisted as a private in this fine unit. He was followed four months later by Allen Hafner. Due to many disruptive issues, the 2nd N.C. broke up in late summer of 1968. 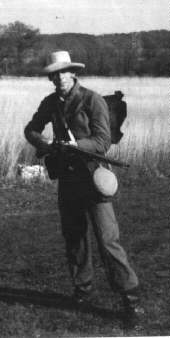 Privates Bopp and Hafner, not wishing to end their involvement, began their own unit that fall. Wishing to maintain the proud North Carolina heritage they had learned from their former regiment, they kept the idea of a tarheel unit. After reading of the proud stand of the 4th N.C. at Bloody Lane, Antietam, they decided this was the unit they wanted to depict.

Several members were recruited including Charles and John Hafner, brothers of Allen, and an African American, Wade Brown. For the next four years the group alternated between four to six members accomplishing only experience coupled with a thirst for authenticity. During this period, Bopp was promoted to sergeant.

Soon good fortune intervened, and the unit finally grew to 10 men. Although the unit was still small, its reputation began to grow. Soon other groups would side with the 4th, and their name was showered with reknown for battle ability and authenticity. Two years elapsed during which Sgt. Bopp was promoted to lieutenant.

Involvement with the existing organization (GAR) was becoming unenjoyable due to the lack of authentic units or capable management. By 1974 the unit had grown to 18 men, and before finally leaving the GAR in 1975, the unit won a trophy for Best Unit by annihilating five separate, larger union units who tried unsuccessfully to defend the town of Menges Mills.

At this point, the 4th N.C. joined a new organization known as the NCWRA. The unit grew from 18 to 38 members and was reorganized. Lieut. Bopp was promoted to Captain, Allen Hafner to 1st Lieutenant with three sergeants appointed: 1st Sergeant - George Trainor, 2nd Sergeant - William Gill and 3rd Sergeant - Keith Albright. By 1981, we had become a non-profit corporation under 501(c)3 of the Internal Revenue Code.

The unit had not only grown in membership, but also in authenticity in uniforms, equipment, drill and camplife. At the present time, the unit works as an independent outfit falling in with Jackson's Division. Our guiding purpose is the education of the public through the most accurate portrayal possible of the life of the Confederate soldier.